When I got married, my sisters were my bridesmaids. For my bachelorette party, my maid of honor, the second in line for the diva throne, planned a fun overnight in the Catskills with a paint and sip party in the evening and then a couple winery tours the following day. I was very much looking forward to spending some quality time with my mom and sisters a couple weeks before the big day and a much needed relaxing weekend in the midst of all the planning.

The night before we were supposed to go, however, we got the call that my grandfather had taken a turn for the worse after his surgery. He’d had heart problems for decades and the surgery was a last ditch effort to get him healthy enough to attend my wedding. Unfortunately, given his age and health, it was a very risky surgery, but he wanted to do it because he wanted to see his first granddaughter married on a mountain!

Instead of driving down to Poughkeepsie, we met in Albany and spent some time with Opa and an aunt and an uncle who were there. All five of them were there in shifts, though we didn’t see everyone in the hour or so we were there. He only opened his eyes once while we were there, but they said he knew we were there.

I stayed at my mom’s that night, and we still made a fun night out of it. Those of us who were of age (read: all but the teenager) went to the casino and had a lovely meal at the buffet. My MOH brought a bunch of silly bachelorette themed necklaces and sashes and we decked out in them and even gave one of the mardis-gras-esque necklaces to our server.

I don’t think I won anything—I almost never do at slots and that’s all I play—but it was still a pleasant evening, and the weekend was just getting started. There were local wineries we could visit, so we did that on Saturday. Then we spent the afternoon lounging by the pool. In the evening we headed to the village on the lake so we could have some more festivities that included the youngest in them.

We did the whole tourist thing even though we’ve lived there for decades. We wandered in and out of shops mostly, I did another wine tasting at the Adirondack Winery’s tasting room and got a bottle or two of my favorite local wines.

I remember the almost-full moon rising over the mountains and shining down on the lake, making the night seem a lot brighter than it was and just being absolutely breathtaking. We attempted many terrible snapchats trying to get the moon behind us, but I don’t think any of them came out very good.

To end the night though, mom wanted to go to the Olde Tyme Photo studio and splurge on a group photo of all us girls in costume and sepia. We went with a Prohibition era theme and each got a snazzy flapper dress, a pair of fishnet stockings, and feathered headbands and boas. We were also given props of empty Jack Daniels bottles, playing cards, and revolvers.

They situated us around a faux bar top-myself, my mother, and my youngest sister sitting atop it while my MOH and second youngest sister flanked us in front. We took a dozen or so photos, swapping props, making different expressions, being serious, being silly. It was one of those silly photos that we ended up going home with. (And one not-so-silly, come to think of it.)

There had been some drama earlier in the night—don’t ask me details, I don’t remember them, it’s what happens when you have a diva and her four divas-in-training in close proximity to one another for too long—and a lot of tension had been building between my mother and her third child. Emotions were high all around. There was a wedding in two weeks, a bride being celebrated that very night, and all on the heels of a heartbreaking loss. That was why we were out enjoying life, celebrating the good things. And so, this picture happened.

My MOH and I had the empty liquor bottles, my mom and second youngest sister had the revolvers, and the teenager had a hand of cards, which she used much like a fan to hide her shocked expression as she leaned into our mother while her older sister pointed the fake gun at our mother with a “I will use this” look of defiance on her face. My mother, for her part, held her gun casually in her lap as she made a wild-eyed “I brought you into this world and I can take you out of it” expression that cracks me up to this day whenever I look upon it. To wrap this image up, on the left side there is me and my MOH, bottles of Jack tipped as we “chug” them with looks of “oh great here we go again/just another day with the family” on our faces.

Every single expression is amazing and I don’t know whose is my favorite. It’s a very close race between my mother and my youngest sister, though.

Of course, now my mother wants to do a new photo every year or so. We did one last summer and got my husband involved because one of my sisters was working and couldn’t join us. Those were some amazing pictures too, I have those framed in my living room.

That will just about do it for this post. Where did this week go? Only 7-ish left until my first real vacation of the year! On the one hand, it can’t get here soon enough. On the other hand, SLOW THIS THING DOWN I WANNA GET OFF.

I will leave you with one last thing. The picture described above: 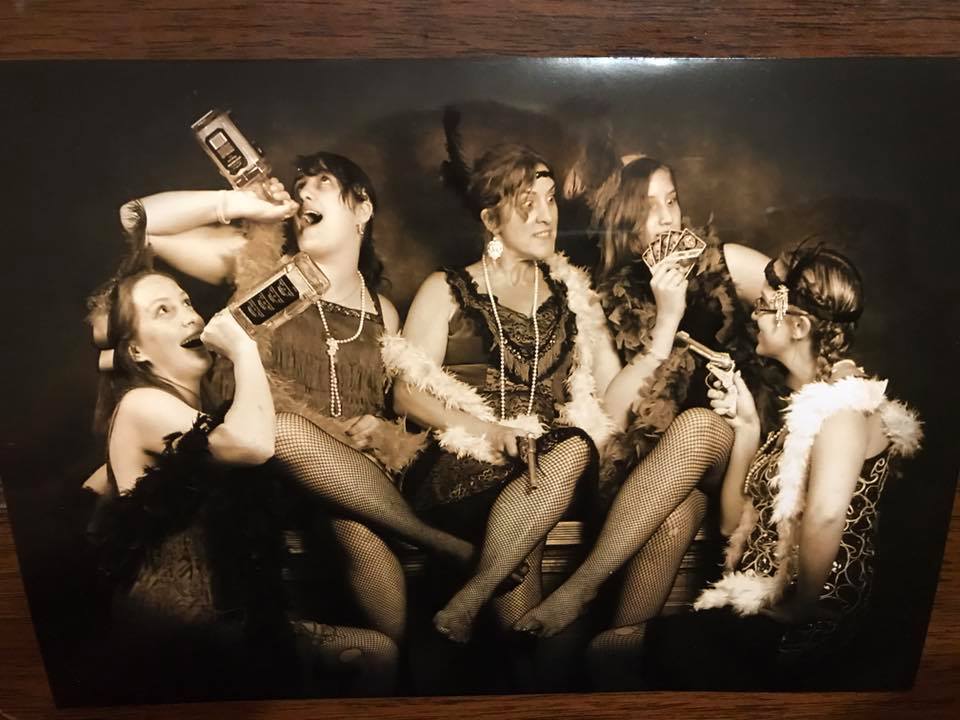 Have a great night! See you tomorrow!

PS-Like these prompts? Like the short stories I write based on these prompts? Want to show your support? Give the blog a follow! Leave a comment! Buy me a coffee! I put a lot of time and effort into these posts and your support means the world to me! Ok, now go out there and write!

I'm a 31 year old kid who plays an adult at work, doing data analysis in the aerospace industry. When I'm not sorting through Excel spreadsheets there or banging my head against my keyboard at home hoping for a story to come out of the garbage, I'm usually reading through a stack of books or watching anime or playing tennis with my husband. View all posts by Sara