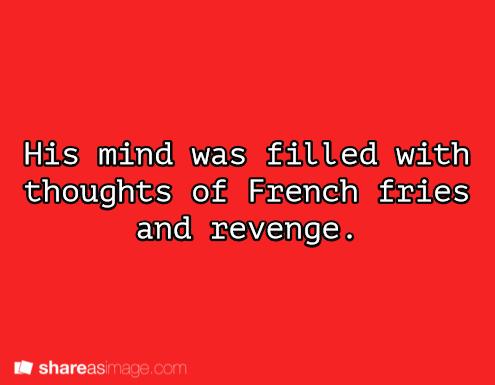 Max’s eyes shot open and he sat straight up off the hard ground, gasping and coughing. He clutched at the bloody hole in his shirt, feeling unsuccessfully for the edge of the stab wound. It had already stitched itself back together. He’d been out longer than normal. He attempted to get back on his feet, but wobbled before he was fully upright and dropped to one knee. What else had she used?

He ground his teeth. Mina would be the death of him one day, especially if she had any say in the matter. She had figured out some combination of sword and poison or spell to keep him under while his wounds healed. It would only be a matter of time until she found a way to keep him from regenerating at all.

His vision started to clear, and his muscles seemed to regain their strength. Dying was annoying, and painful, but at least it was an extreme state of being. He had no concept of time or feeling while dead. Being alive and aware of his slowly returning strength bothered him more than just dying though. It also hurt like hell.

He tried a few test steps to see if he could propel himself forward and found that his legs were no longer jelly. He was going to find her again. He would make her pay for putting a hole in his new shirt.

His stomach growled, reminding him of all the energy he had used to heal his chest wound. First, he would get some French fries. And then, his revenge.

Notes: I had so many iterations of this prompt running through my head all night it took me forever to just start writing one. I had “M” in my head for the character’s name, and almost turned this into a prompt for Midge, since he’s always thinking about food and he seems the type to get revenge for his friends. I also thought about doing some sort of elementary school recess plot, but I couldn’t get it going at all.

I realize I’m ending the week on a short note, and I’m not sure if it’s the cold or if I’m coming down with something, but I have just been super tired all week and I just want to go to bed. Hopefully next week goes a little smoother! Have a great weekend!

I'm a 31 year old kid who plays an adult at work, doing data analysis in the aerospace industry. When I'm not sorting through Excel spreadsheets there or banging my head against my keyboard at home hoping for a story to come out of the garbage, I'm usually reading through a stack of books or watching anime or playing tennis with my husband. View all posts by Sara